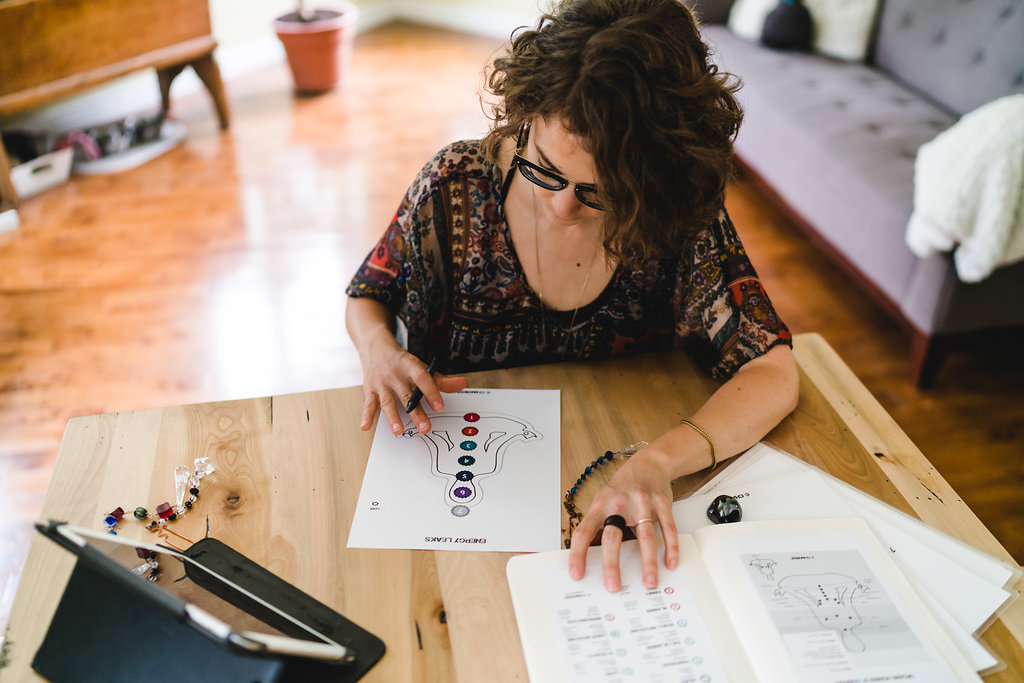 “Under any chronic condition there is a parasitic energy at play. Let’s unveil it.”

You’ve been struggling for some time now.

Desperation, resignation and sabotage are next to come.

Because, in the end, whatever you do, the dis-ease always found its way back as

It’s holding on to your energy and health just as parasites do. Maybe because that’s exactly what it is…

Please don’t lose hope. I have good news for you : there is another way.

Now is the time to clear and detox from all the energetic blocks that interfere with your full potential.

Welcome to my energy world and the magic of Chakredy®!

Identifying the energetic root causes of your pattern, illness or chronic condition is key to access healing.

Working with the energetic component of parasites has been life changing not only for my own health journey with chronic digestive issues and parasites (oh yes, they are real!), but also for my family and clients dealing with anxiety, chronic bloating, mysterious unexplained physical pain and symptoms and even autism.

I’ve been there, feeling miserable, desperate and defeated, even sabotaging myself because “after all, what difference does it make, the pain won’t go away”. I am happy to let you know that I found a way out of it.

What I found out is how certain unresolved emotions are acting as doorways to let in energies that trigger illnesses, sensitivities and patterns. In order to heal from them, one has to close these doorways so the different cells, tissues and organs of the body can restore their full potential and balance.

Then, the body is able to absorb and use all the goodness of the different physical support one is providing it (and I know that you’ve invest time, energy and money into supplement and herbal protocols and diets).

Over the year, after my training as a health coach (HCI) and an energy worker Chakredy®), I’ve specialized in autism for kids, chronic conditions and gut related symptoms for adults.

My mission is to help you discover the root causes affecting your wellbeing and free yourself from all parasitic energies that are limiting the expression of your full potential and true health.

The Chakredy® system has open up a complete new world and level of understanding and accessing information from the body itself through the chakras and organ wisdom.

I am always so amazed to see how we already have it all inside of us – all we need for healing our wounds. It just needs some clearing and activating. And that’s exactly want I mean to do for you : bring awareness, give you tools and the opportunity to activate and tap in your own healing superpower.

How to work with me

To support any chronic condition or limiting pattern

A typical session (done every second week to let the energy adjusts) includes :

Please note that single sessions are possible but recommended for adjustments and can be done online one on one.

Vincent is a 4 year old who received a diagnosis of autism at three.

It was hard for him to express himself – he had a very limited vocabulary – and connecting with other kids and was still using diapers.

The mother’s first concern was his ability to express himself and be understood by others and his cleanliness training so emphasis was put on those two aspects.

Each session started with an energetic assessment to see how his energy was presenting and what support was needed at the moment.

It was then followed by any energy work needed to support mental, emotional and physical body systems. This part would always change from one session to the other.

Several energetic interferences that caused disturbance and disfunction were discovered and untangled. Some of them were linked to parasitic energies.

After the 4th session, Vincent had a drastic shift and started to express himself with past tense verbs on real past tense events, a fantastic progress for this little boy.

Two more sessions were done. The last was one dedicated to supporting his cleanliness training. Two days after that session, while he was in the car, he pulled down his pants and diaper and told his mother : “Pee pee”. The next day, he went to the toilet for the first time.

The work continues on Vincent to help him open up even more and prepare him for kinder garden next year.

Here is her mom’s testimonial:

“I chose Madeleine’s remote services for my 4-year-old son Vincent, who was diagnosed with ASD level 2 at the age of 3. Madeleine has been working Vincent’s energy for a few months now, without him even noticing anything.

As a parent, I have seen improvements and drastic changes in his behavior. And what impressed me the most was that even the entourage noticed these changes without me mentioning Vincent’s energy work.

Since the beginning of treatments, Vincent has made spectacular advances in his overall development, his language and his ability to express his needs and enter into relationships with others.

He is much more open to his environment and interacts more with other children. He had absolutely no interest in cleanliness at the beginning of his follow-up and now wears training pants on his own initiative after only a few months!

I really appreciate Madeleine’s video and audio follow-ups. She takes the time to dissect the priorities to work at the moment and what are the causes. It gives me good avenues to interact with Vincent to support him in terms of the challenges that she perceives.

The results obtained with the intervention of Madeleine are exceptional and I warmly recommend her services.” Kaylynne

If you are a health professional and want the detailed energy work that was done for referrals, please contact me at info@madeleinewerabussiere.com and I’ll send you a link.

Julie is a web consultant and trainer for companies and entrepreneurs.

Before we started working together:

She used to lose her voice before important events and trainings and was considering slowing down her business to accommodate her voice even if she felt like expanding it.

She came to me to try something completely different and see what Chakredy® could do to help her keep her voice.

Since Julie’s condition looked like a pattern, we first did some circuit work to understand how this pattern was holding on to her energy, what were the weak spots (emotions) it would trigger and have a full picture of the web it was creating, from one trigger point to the other.

After the clearing of all trigger points, we did some repatterning with supportive healing energies.

It helped Julie understand her triggers, make changes to support her needs and have her full voice when she most needed it.

We also add some herbal support that she continued taking few days before an event to make sure her voice wouldn’t fail her.

Julie had two 2 hour session. After more than a year, she only lost her voice once and understood why.

You want to take a few minutes for us to talk about your needs and situation to make the best choice?

Please book our time together here!